Marathon mission: Why those final steps are a killer - CNN.com <![endif]-->

Marathon mission: Why those final steps are a killer 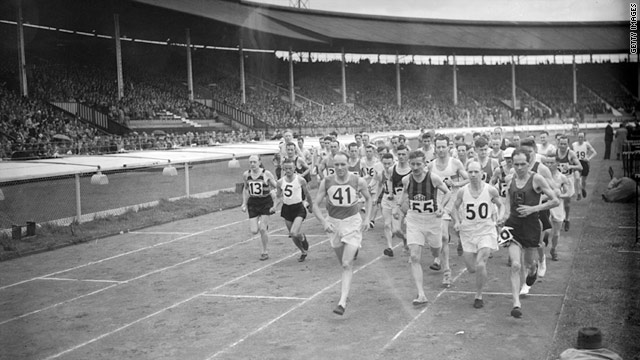 Competitors start a marathon at the White City Stadium, London in 1939.
STORY HIGHLIGHTS

Update: Both Peter Wilkinson and Paul Armstrong completed the 2011 Brighton Marathon in 3 hours and 33 minutes.

(CNN) -- As my CNN colleague Paul Armstrong sprints and I stagger towards the end of the Brighton Marathon in southern England on Sunday, with the traditional words "God Save the Queen," we will curse the wife of King Edward VII for adding 385 yards to the 26 miles that we will already (hopefully) have run.

For believe me, those 385 yards are a killer.

Marathon running is one of the few sports in which professionals compete alongside amateurs.

And while the competitors of the 1908 Olympics were amateurs, I blame them for agreeing to run an extra 385-yard lap of the White City Stadium in west London after the 26 miles they had already travelled from Windsor Castle, just so the race would finish in front of the royal viewing box.

Believe me, those 385 yards are a killer
RELATED TOPICS

The International Amateur Athletic Federation (IAAF) also complied with the royal request by setting a new official distance of 26.2 miles in 1921.

For the previous 25 years, after the first modern marathon of the 1896 Olympics in Athens, the distance had been flexible, varying between 24 and 26 miles.

This was the approximate distance that a Greek messenger called Pheidippides ran to Athens to tell his anxious countrymen that they had defeated the Persians in battle near the town of Marathon in 490BC.

Legend has it that Pheidippides -- a determined, if unfit, long-distance runner -- delivered the succinct message "victory," then dropped dead.

That race was won by Spyridon Louis, a Greek water carrier. His time of two hours, 58 minutes and 50 seconds was seven minutes faster than that of the runner-up. Of the 25 entrants, only nine runners finished.

Paul and I are unlikely to match Louis's time without a strong following wind, and I doubt we will utter the word "victory." But as long as the final 385 yards don't do for us what they did to Pheidippides, we will be happy.

Fine art from an iPhone? The best Instagram photos from 2014